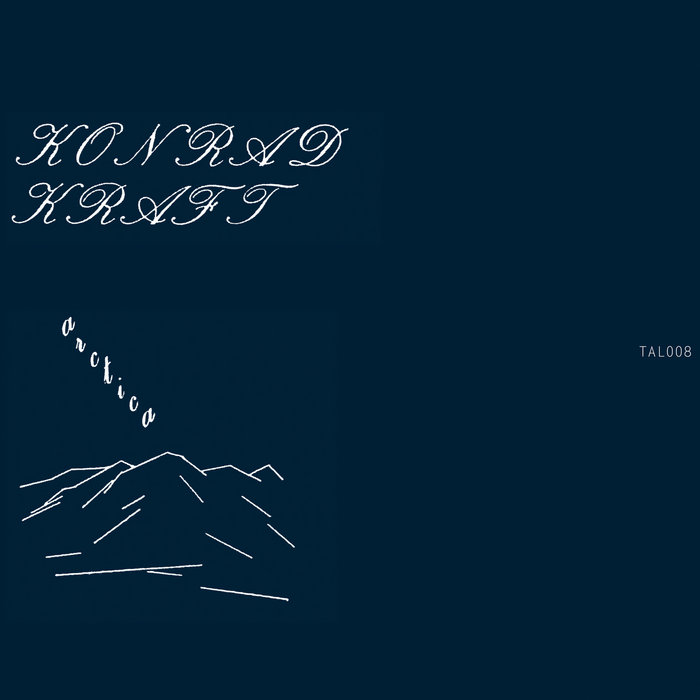 Pionneering production from the Düsseldorf mid 80s electronic underground world. Transferred for the first ever time from the original cassette to vinyl and CD.

Konrad Kraft (Detlef Funder) is one of the still overlooked producers of Düsseldorfs fertile electronic music scene. ARCTICA was originally released on Cassette on Funder's imprint SDV TONTRÄGER in 1987 in a handmade edition of about 50 copies only.

Reduced to its essential musical elements, ARCTICA certainly contains some of the most uncategorizable and bewildering pieces of mid-eighties electronic music. Set between the areas of post punk and early techno, the album undulates between analogue as well as digital instrumentation. After Konrad Kraft's appearance on the enthusiastically received compilation Sammlung - Elektronische Kassettenmusik, Düsseldorf 1982 - 1989 (compiled by Stefan Schneider for bureau-b in 2017) TAL presents his full-length album for the first ever time on vinyl, CD and digital formats.

In the mid-eighties synthesizers had become increasingly affordable due to digital electronics, allowing more and more people to produce music. It was also a 'post - band' period. People now had projects, often being musician, producer, engineer and label manager all at once. Since most electronic records of the 1970s Krautrock scene were not widely available in Germany and also somewhat out of fashion, it is not irrelevant to know that the prime sources of inspiration were records by Cabaret Voltaire, Throbbing Gristle, Dome or Nocturnal Emissions. Record shops like HEARTBEAT, which existed in Düsseldorf between 1985 and 1987, offered a wide range of experimental music and served as an umbrella for the disparate strands of the electronic side of post punk. HEARTBEAT also attracted a loosely connected scene of young musicians who shared a deep seated passion for electronic sounds. Cassettes were the medium of choice for self produced recordings.

At the time of the ARCTICA sessions, the newly set up SDV studio consisted of a Tascam 38, an eight-track tape recorder, and only a handful of synthesizers such as a Roland JX3P and a Korg Monopoly. The style of Konrad Kraf'ts productions displayed (ever since and up until today), a strong adherence to an idea of continual self-creation and a quality of wanting to be responsible for one's own identity. Even three decades after its recording, ARCTICA still evokes images of an expedition into an edgy cold place which has strange wonders, polar lights, structures of ice and innumerable worlds and creatures in store.

Konrad Kraft (who today runs Paraschall mastering studios): "In the early 70's I got a transistor radio as a gift and immediately fell in love with the shortwaves. So many different sounds that was truly fascinating. I can imagine that nowadays as music is endlessly compressed to fit into mobile phones and as music on the radio sounds dreadfully the same, there might be a renewed interest by a young generation in discovering electronic sounds. I can listen to ARCITCA much better now than when it originally came out, because there is a distance which allows me to approach the recordings on a more neutral plane.

Even though more than 30 years have passed I know the tracks and the prevalent mood of the time captured in these recordings is still very much with me. ARCTICA seems to sound even more contemporary today than it did in 1987."

Bandcamp Daily  your guide to the world of Bandcamp

Featured sounds from Fly Lo and Ahmed Idris, plus Mother Nature hops on to drop off new project